Army NCO Counseling Pack All in one Updated December 2017 Counseling Soldiers has always been a challenge for new Noncommissioned
Officers so our team of NCOs has created over 60 Counseling Statement
Examples with updated forms and regulations to provide all NCOs the best
resource needed to produce clean and to the point counseling statements.
Product features include:

Low APFT Score Prior to BLC

Overweight Prior to BLC

Improper Use of Prescription Drugs

Frequently asked questions about the C and R Device The U.S. Army Human Resources Command approved the implementation of the C (for
combat) and the R (for remote) devices on March 15, 2017 in MILPER Message 17-095.

The devices are retroactive to January 7, 2016, when the Secretary of Defense signed the
directive authorizing their creation.

The creation of the C and R devices is the result of the Department of Defense’s
Military Decorations and Awards Review (MDAR).  This year-long, formal review involved
the DoD, Joint Staff, Military Departments, Combatant Commands, and several other
stakeholders. to ensure the Department’s military decorations and awards program
continues to appropriately recognize the service, sacrifices, and actions of our service
members.

The review found that some medals are inherently for combat service or achievement
(such as the BSM), while other medals are not so distinct (ARCOM).  The creation of the
C and R devices is in response to requests from across the Service Departments for a
way to distinguish such awards as having been earned in combat or for directly
contributing to combat.

The C device was created to distinctly recognize those service members performing
meritoriously under the most arduous combat conditions and the R device was created
to recognize personal performance in remote service that directly impacts combat
operations.  MILPER Message 17-095 provides more specific definitions of each.

DoD directed the specific awards eligible for a C or R device, which is detailed in
MILPER Message 17-095.

Not all awards earned during a deployment are authorized a C device. The device is
intended to recognize service or achievement specifically under combat conditions.
Likewise, not all support provided from a remote location qualifies for an R device.
The R device is intended only to recognize achievements which directly impact combat
operations. See MILPER Message 17-095 for specific guidance and examples.

The guidance detailed in MILPER Message 17-095 will be incorporated into the next
publication of AR 600-8-22, Military Awards. 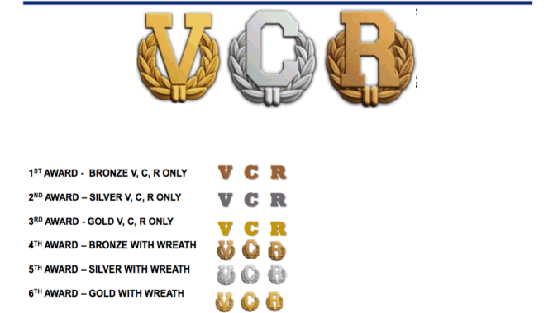